Tips for documenting your sources

The American Psychological Association, or APA, maintains a style sheet called APA Style. APA Style provides guidelines for formatting documents and citing sources in text and in a references list. APA Style is typically used in the social sciences and education, nursing, and social work programs.

Please note: The newly updated version of APA style, the 7th edition, will go into effect this year; our page will be updated to follow any new guidelines by summer 2020. Here are resources to help you cite if you are required to use the 7th edition before then:

Notable changes in the 7th edition

In your college career, you will be expected to cite all of the sources you use in your papers. Don’t just cite sources that you directly quote!

Check out one of the resources on the left for more information on citing your sources. Click here to see a sample essay.

Introducing the author within your text:

In his article, "Individualism and technology," Khan (2001) notes differences between Western popular culture and collectivistic cultures, specifically the Kenyan culture.

Signal Phrases. A signal phrase helps to introduce the source and visually cues your reader that you are about to introduce somebody else’s ideas.

Including source info parenthetically only:

The second reason is that a shared cultural knowledge about writing exists – a knowledge that the American students and teacher bring to the American composition classroom (Ramanathan & Kaplan, 1996).

Citing a quote or paraphrase:

The list of sources at the end of your paper should be titled "References." Click here for a great sample essay that includes a reference list. Check out the Purdue OWL or the manuals listed on the left to find out how to cite any kind of source.

Here is an example reference page that demonstrates appropriate layout and rules for creating a source list: 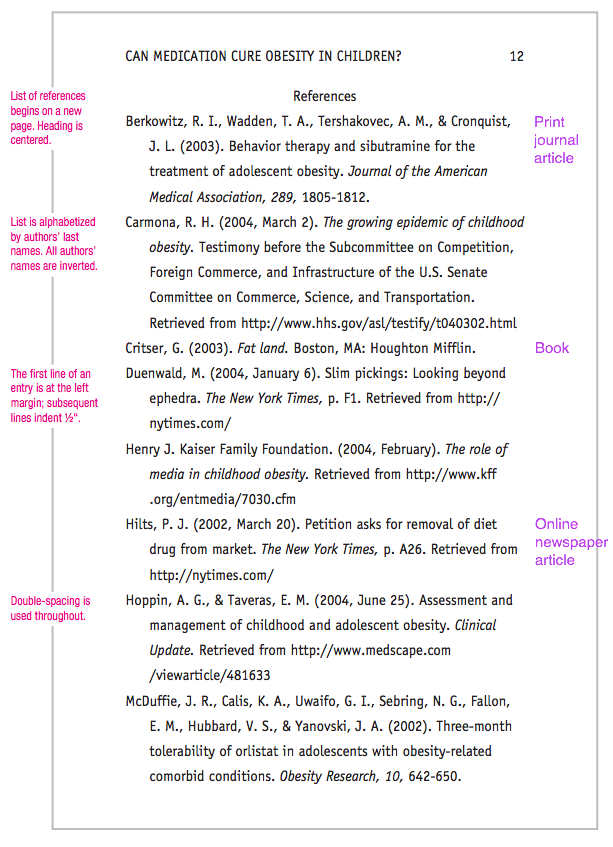